A blog about creativity, technology, & humor.
Want To Track Secret U.S. Drone Strikes From The Palm Of Your Hand? There’s An App For That
Baratunde Thurston 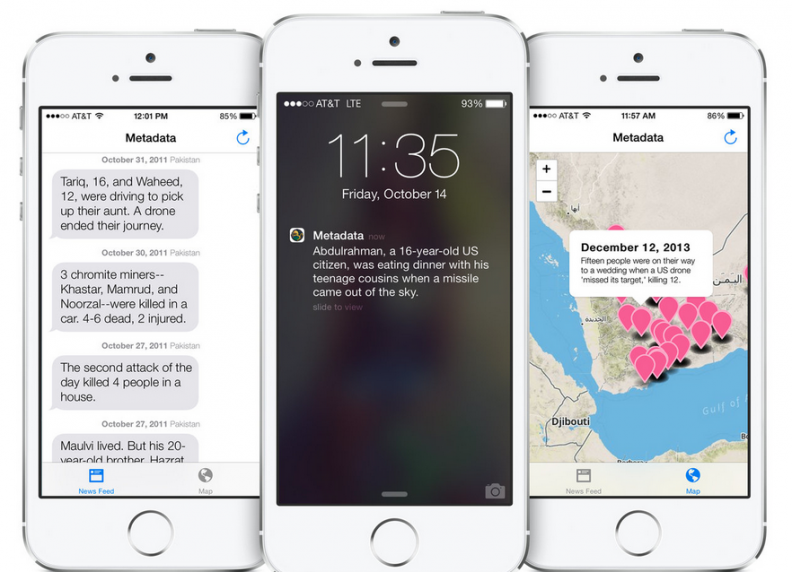 Back in September 2012, I tweeted about Apple’s third-time rejection of Drones+, an iOS app that displayed reports of killings by U.S.-operated unmanned aerial vehicles. The app’s creator, Josh Begley, emailed to thank me for the tweet, and thus began an occasional electronic messaging relationship about data, hackathons, and robot warfare.

Two more Apple rejections later, Begley has finally gotten his program into the App Store, and he agreed to an email interview, the lightly-edited transcript of which is below:

1. Could you explain briefly what this app does and what you are trying to accomplish by publishing it?

The app is pretty simple. It sends you a push notification every time a U.S. drone strike is reported in the news. (Do we want to be as connected to our foreign policy as we are to our smartphones?)

2. Why is the logo a giant squid gripping planet Earth?

C’mon, Baratunde. It’s in honor of my favorite cartoon character, [U.S. Director of National Intelligence]  James Clapper. I hear the octopus is his spirit animal. (The original tagline is pretty great too.)

Secret octopus satellite. In case you were wondering. pic.twitter.com/eYpJL6Ak21

3. What are your data sources for the information in the app, and what technology is involved in capturing and presenting it? Basically, how did you build this? Please assume the people reading this are not iOS programmers.

The short answer is I read a bunch of news stories. Everything in the app comes from major news outlets — Associated Press, CNN, New York Times, Reuters — and you can see citations over at @dronestream. I wouldn’t have been able to do any of it without The Bureau of Investigative Journalism though; they’ve collected links to virtually every English-language news story about covert drone strikes since the first one in 2002.

4. Are you violating any U.S. laws in publishing this app? Please assume people reading this are federal prosecutors.

Just the marijuana ones. (Kidding, I haven’t smoked since high school.)

5. I would expect an app that provided updates on U.S. drone strikes to be called something more obvious like “U.S. Drone Strike Updater” or “Drone-y Bird,” but this is called “Metadata+” and the App Store description is about as obscure as I’ve ever seen simply offering “Real-time updates on national security.” Why is this?

Apple wasn’t really feeling an app with ‘drone’ in the title. Or maybe they were, and they just accidentally clicked the ‘REJECT’ button five times. Either way, it’s pretty fun to play UAV Fighter, an iPhone app developed by TransLumen Technologies (military defense contractor). Or Drone Fighter 3D, where you can “fly your drone covertly through enemy airspace and take out targets.”

6. The visual interface of the drone attack reports is reminiscent of text message displays on the iPhone. Why, and when will we be able to send text messages to the drones themselves?

I was going to try to say something witty, but then I read Jeremy and Glenn’s story about the NSA putting fake cell phone towers (or “virtual base-tower transceivers”) on drones. Perhaps folks in Yemen can send them text messages already.

7. Scrolling through the incident history all the way to the beginning lands on November 3, 2002 at the first known U.S. drone attack. That same day was the 7.9 magnitude earthquake in Denali Park, Alaska, the largest recorded quake in the interior U.S. in 150 years. Did the U.S. drone strike in Yemen cause the Alaskan quake or did the Yemenis retaliate by attacking the U.S. with an earthquake?

Both. At the same time. Without question.

8. Based on the map pins, it seems like the only places the United States is launching drone strikes are East Africa, the Arabian peninsula and Afghanistan/Pakistan. I thought we were number one. Are you sure your app is capturing all U.S. drone strikes? I feel like there’s a lot of un-bombed ground out there.

You make a good point. Unfortunately, I’m only capturing the secret ones. Who knows what the drones are doing over Jane Fonda’s cafe.

10. Where do you go from here? Will you track cyber attacks? Other nations’ unmanned strikes? Offer more contextual news coverage of the reported strikes?

No idea. Hopefully the next stop is one of your #whiskeyfriday events. After that, maybe I’ll wander toward the park and find a soccer game.

This concludes the formal email-pasting portion of the interview. And now for a quick author’s note:

There are many apps and services telling us about our caloric burn, home temperature, and split times on the bike ride home. What Josh has built with  Metadata+ is an important step forward in using technology to tell stories about who we are, not as individuals, but as a collective whose actions, for example, may be passively supporting secret wars around the world. I hope it’s one of many tools that will be part of a “quantified collective self” movement. If not that, then at least let me fly my own drone using my iPhone like Ender Wiggin! If this topic interests you further, see Josh’s talk from May 2013 about the project.