A blog about creativity, technology, & humor.
The How & The Why Behind BaitBlock, A Chrome Extension That Kills Click Bait
Craig Cannon 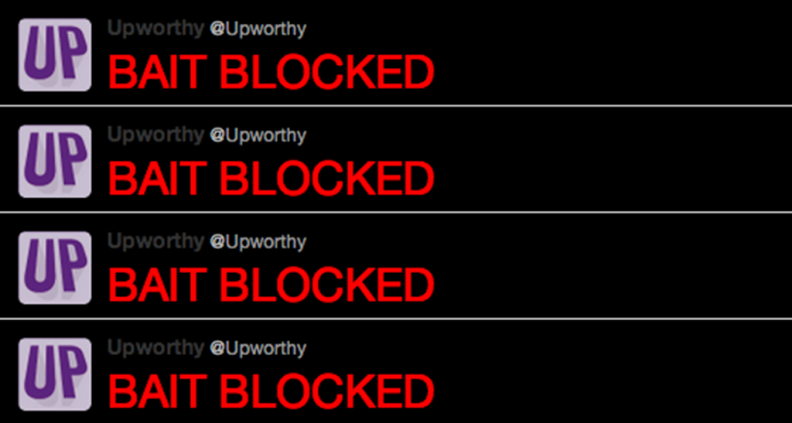 I’ll pause for a second to mention that after the first CHD I realized how few sites there were that encouraged playfulness. I mean this in two ways: playfulness in how a user interacts with a tool and playfulness in why a user interacts with a tool. Either quality could exist on its own within an app but I’m suggesting that both benefit from the other’s presence such that the whole is greater than the sum of its parts.

Playfulness in how a user interacts is pretty straightforward: the app is fun to use. The app takes common design patterns and fiddles with them just enough so as a user you experience a neat interaction then stop and think, “oh, that was nice. I want to do that again.” If you focus all here you’re in game territory and games are awesome but I’m interested in play as a creative and constructive exercise and games don’t always accomplish that.

I think baking playfulness into why a user interacts with a tool moves you closer to that creative, constructive online environment. Industries all have their own word for this playful construction – riffing, remixing, forking – but it’s in large part the same concept: you find a thing you think is cool and try to make it better then throw it back into the ring. A commitment to encouraging those constant permutations around a thing feels like an essential component of any future creative platform. What I discovered through the most recent CHD was that there might also be reason to encourage a level of remixing and modification above individual items of content.

Going into the most recent CHD I made a commitment to help at least one of the teams turn their hack into a more lasting and hopefully useful product after the weekend concluded. I decided to work with Matt Klinman to help him expand his project, Clickstrbait—a site that generates clickbait headlines and traps users in endless loops of annoying UpWorthy-esque overlays. Here’s his hilarious demo. After the event we decided to make a Chrome extension that functioned like AdBlock for clickbait. We call it BaitBlock and you can find it here.

It’s pretty simple. After you install the extension, head on over to Twitter where you’ll see small buttons injected into each tweet’s div. You can use those buttons to flag any tweet as clickbait, which will block it from your feed. Once a tweet passes a certain number of blocks globally it will be blocked from the feeds of everyone with the extension installed.

While demoing it among friends and then at Brooklyn Beta last Friday, I was happy to see that people had fun using it and wanted more. Their first question was invariably, “where else can I block stuff?” They wanted to modify the interfaces of their favorite sites and leave it for their friends to see. The notion resembles an odd sort of digital graffiti/geocaching that, to me, looks and feels like play.

I’ve yet to come to any hard conclusions as to how—or if—a more versatile modification tool would be useful, but it seems like engineering a way for a non-technical person to mod the web could be fun.

If you want to chat more about this stuff, shoot me an email.

Special thanks go to Kevin Foley and Jon Ferrer for helping out with Clickstrbait and BaitBlock, respectively.