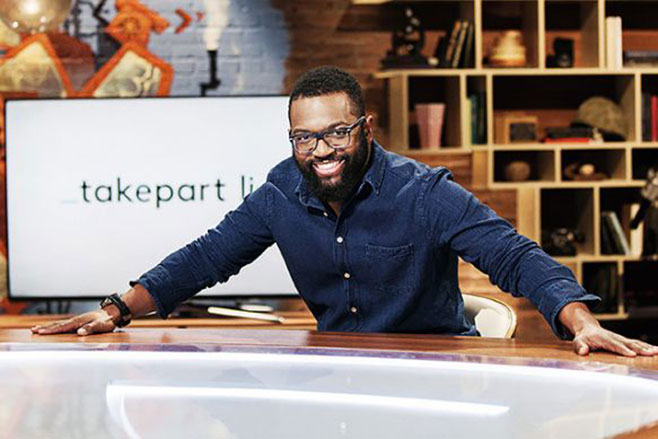 San Francisco, CA (October 8, 2014) – Cultivated Wit, a company that produces events and content worth hyperlinking in a lede, issued a press release today announcing that CEO and Co-Founder Baratunde Thurston will be embedded within Participant Media’s TV network, Pivot, as a co-host on TakePart Live. Thurston joins Meghan McCain and Jacob Soboroff on the nightly news program (10pm ET/7pm PT) produced by Embassy Row (Bravo’s Watch What Happens Live, AMC’s Talking Bad and The Talking Dead) that airs on television (large rectangular screen, likely on your wall or entertainment center).

“I’ve always been part of Big Media, from my college newspaper to the Jack and Jill Politics blog to The Onion to tweeting hard in the paint” Thurston said to himself then wrote in this release to present the image of a massive operation. “I’m excited to join TakePart Live where I can join smart discussions on issues of the day and share my point of view and my beard with the American people.”

Thurston will remain the subject of this press release’s third paragraph, just as he will maintain his title of CEO while appearing nightly on the LA-based show. Meanwhile, Cultivated Wit will continue to operate out of San Francisco with co-founders/partners Craig Cannon, Brian Janosch, Mike Jeter, and Adam Peterson; plus a slew of non-disclosed, globally distributed “assets.” The company (Cultivated Wit, in case you already forgot) recently completed its fifth Comedy Hack Day—a creative weekend at which developers and comedians build comedic apps. The team will bring the experience to Los Angeles December 5–7.

In addition, Cultivated Wit is continuing to work with clients such as Open Society Foundations, Comedy Central, and GE; helping them tell stories with wit, intelligence, and burritos. The latest example of this is the “Blow Minds. Teach STEM.”, campaign, an effort to recruit science, tech, engineering, and math teachers in the United States. Cultivated Wit created the animation, website, copy, and social media behind this effort.

“Let’s see, we need a quote right around here,” Janosch thought, then wrote, without ever once saying out loud. “I suppose I could ‘say’ something about how busy we are, and how encouraging that is considering our company is still only two years old. And now with Baratunde on the west coast, we’ll actually see more of him than before—a good news bad news situation, because that guy drinks all our whiskey when he’s in town.”

Craig Cannon could not be reached for comment as he was last spotted in Brooklyn in order to comply with the company’s unwritten rule that one executive must always be in New York City.

Mike Jeter and Adam Peterson could be reached for comment, in the same way that 90 percent of all press release comments are just somebody giving the PR department approval to write a quote for them.

“TakePart Live’s mission to inspire action through entertainment is consistent with Cultivated Wit’s work,” Jeter had attributed to him. “We’ve been playing in that space for years, so to have Baratunde join a new network facing that challenge head-on is exciting.”

Prior to starting Cultivated Wit, Thurston wrote the New York Times best-seller, How To Be Black and served as director of digital and politics editor for The Onion. He’s been a frequent speaker on the lecture circuit, addressing issues of race, new media, and more recently, the need to humanize our technology-centric world with art and humor. Thurston is also known to write his own last paragraph for any press release about him.

Founded in 2012 by former executives at The Onion and later merging with design and animation studio I Shot Him, Cultivated Wit creates and markets content for causes and clients that want to be more fun. It infuses thoughtful comedy and design into digital campaigns that inspire, entertain, and tickle people right at that spot between the chin and neck. The company’s signature public presence is its Comedy Hack Day event series, which brings developers and comedians together to create comedic apps. In the process, they explore new ways to be creative and forge lifelong, unbreakable bonds of friendship and loyalty.

For reasons no one can fully explain, documents like these still exist. Rather than a more personal and direct explanation of the news, an entire industry has sprouted around a more stilted format, complete with perfectly placed and perfectly safe quotes. After financing a billion-dollar military effort to destroy the press release format once and for all, our non-existent investors realized the effort had made no impact and decided, “If you can’t beat em, join em.” Now we’ll close with three sequential hash marks, again, for reasons no one can fully explain.