A blog about creativity, technology, & humor.
Why Detroit Is The Perfect Place to Kickoff Our Crowdfunding Web Series
Baratunde Thurston

Although I’ve been visiting my sister in Lansing, Michigan for over seven years, I only got a good look at Detroit for the first time one year ago. I had been invited by MIT Media Lab Director Joi Ito to be part of a four-day innovation hackathon involving the Lab, IDEO, and various Detroit community leaders.

We spent those days at places like D-Town Farm, OmniCorpDetroit, Detroit Dirt, FAME SHOP, and more. From Corktown to Brightmoor, we experienced a wide range of the sprawling 139 square mile city.

After that weekend, I developed deeper relationships with the city and those working toward its healthy reinvention: MIT Director’s Fellow Shaka Senghor and his work to help communities recover from the scourge of mass incarceration; Jeff Sturges and his Mt. Elliott MakerSpace; Phil Cooley of Slows BBQ and Pony Ride; plus friends and Detroit boosters Nicole Patrice DeMember and Nia Batts who have connected me to the side of Detroit not found on national newspaper covers.

Then came an opportunity for me to help share an image of Detroit myself through the 10-part web series on crowdfunding called Funded.

Cultivated Wit’s roles in Funded were as host (my big face/smile) and writer/producer (principally Brian and his Field Notes notebooks). In choosing which businesses to include in the series, we sought diversity in a variety of ways.

Crowdfunding Platforms. We would fail if this show became “The Kickstarter Show.” There are scores of online crowdfunding platforms, and we researched over 50 of them, often speaking directly with the platform operators to find stories of which they were most proud.

Geography. Of course we captured stories from “innovation hubs” New York and the Bay Area, but we also featured campaigns from Durham, NC and Shoreham, Long Island and New Canaan, CT.

Gender. Seven of our 10 businesses have women as primary founders.

Our kickoff episode, featuring Detroit Soup, meets all these criteria and more.

Unique among our 10 episodes, Detroit Soup is not the result of a crowdfunding effort. Rather, it serves as the crowdfunding platform itself, and it does so offline. There’s no graphical progress bar showing funds raised, no “tweet this link to your friends,” no polished video pitch. Detroit Soup represents crowdfunding at its core: an actual crowd physically gathering to support neighbors with cash funds. 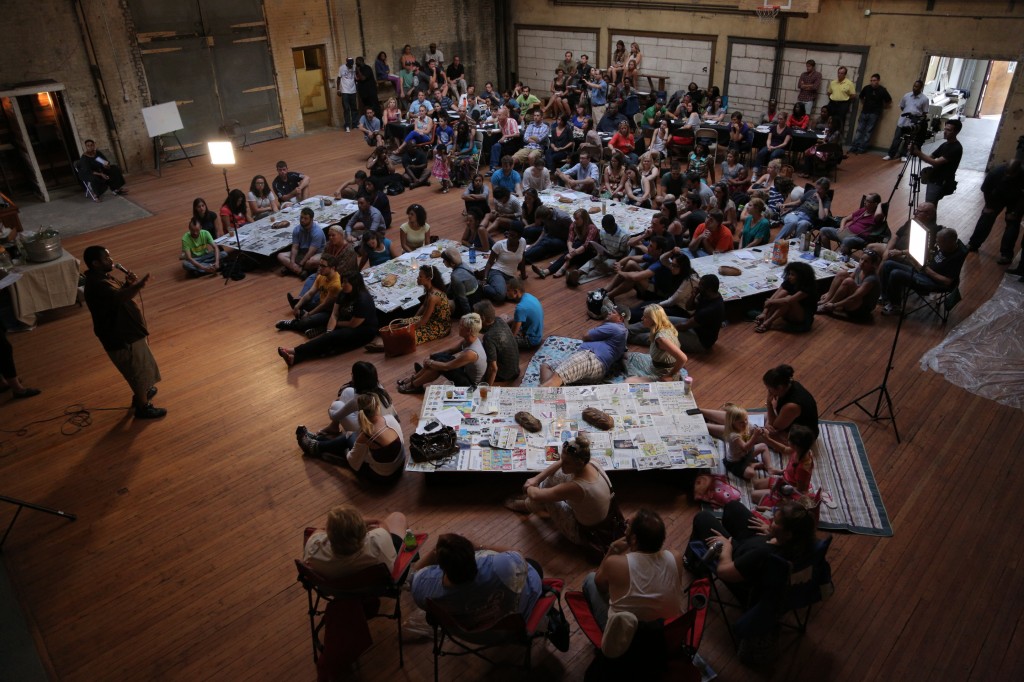 Unlike every online crowdfunding campaign we profiled, Detroit Soup doesn’t just direct funds and attention from backers to projects but facilitates communication and inspiration from backer to fellow backer. When you gather your community the way Detroit Soup does, the supporters talk to each other in the dinner line, they sit next to each other at tables, and all the while they exchange ideas. There is as much energy and value distributed among backers as there is directed toward projects.

Having all of this go down in a heavily challenged but resurgent Detroit made this episode about more than any single product. It made the story one of an entire city. At least that’s what we were going for. As Detroit Soup founder Amy Kaherl said about her city, “Innovation comes out of necessity, and we have a crap ton of necessity here.”

If we had to pick one episode that captures the spirit of Funded, it is Detroit Soup, and we are so proud to have it launch the series.