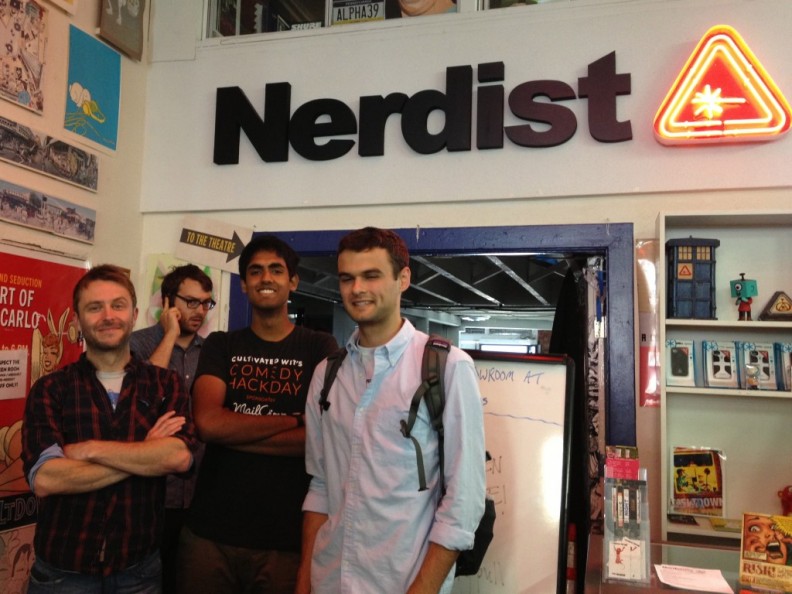 Loyalists and stalkers will recall the self-anointed “Greatest Hackathon Prize Ever” we awarded our Comedy Hack Day SF winners: an all-expense-paid trip to Los Angeles to meet Chris Hardwick and sit in on a recording of Nerdist. Well, four months later we finally made good and sent Conor Doherty and Ansh Shukla of the winning Citation Needed team to LA last weekend.

They arrived Sunday to join the audience of Hardwick’s other show Talking Bad, not without a dose of Korean military intrigue, then stuck around Monday to sit in on a recording of the Nerdist podcast featuring guest Jim Norton. Rather than tell their story for them, we gave the Stanford students a little extra homework and asked them to share their account first hand.

These are the words of Conor Doherty:

On Sunday afternoon, we discovered a voicemail from Monica, our contact at Nerdist. The recording cut out after a few seconds, and all we could discern was that Monica was in “the reserves,” had been “activated” and was currently in Korea. Briefly, but for far longer than was reasonable, I considered the possibility that Nerdist was actually a multinational paramilitary organization, and not merely a digital media company. Soon after, Ansh and I got an email from Monica (who we later learned serves in the National Guard) telling us to be at the CBS studios in three minutes. We had forgotten to pack our teleporters, so we didn’t make it in time. The guard at the gate was not aware, and could not be convinced, of the level of celebrity and privilege that comes with winning a comedy hackathon and denied us entry. We sent out several forms of electronic cries for help and then left. On a scale of one to awesome, I would give this moment a one.

Minutes later, we got a call from Kyle at Nerdist who, despite listing a yahoo email address on his business card, is apparently important enough to grant us exemption from any and all security measures normally imposed on the plebeians who have never created an amusing mobile application in a contest setting. He took us past sets for The Price is Right and The Late Late Show with Craig Ferguson to a green screen room full of people watching last season’s final episode of Breaking Bad before we all watched this season’s premiere. Watching TV deep in the bowels of a cavernous studio is far better that watching TV at home, and I recommend it to anyone who gets the opportunity to do so.

As we waited in the Talking Bad studio for Bright White Sun or whatever to finish, we attempted to surreptitiously communicate (we remained in possession of contraband phones thanks to Kyle and his knowledge of back entrances to the CBS) with the good people at Cultivated Wit and with Monica who, at this point, we thought of as a benevolent but inscrutable God figure for our Nerdist vacation.

Somehow my belief in the magic of television survived the experience of watching it being made. I felt manipulated by the man who told me to applaud every 5-7 minutes, but he was clearly a professional so I followed his orders. Julie Bowen was so blinded by her love of Breaking Bad that she kept interrupting show creator Vince Gilligan who knows more about the upcoming season than literally anyone. Chris Hardwick is good at saying things in front of a camera.

The W Hollywood is both the swankiest and shiniest hotel I’ve ever stayed in. Pro: I could watch SportsCenter from the shower. Con: they wouldn’t let my friend enter because he was wearing sandals. Pro: “Mr. Thurston” is a gold member so I was entitled to a free drink at 10am, had I so desired. Con: they told Ansh and me that the rooftop pool closes at 6pm when, in fact, I’m pretty sure it was full of beautiful people doing cocaine.

The Nerdist podcast recording studio is somewhat different from the CBS studios. It’s in the back of Meltdown Comics in Hollywood, and I was able to walk in the back door even without an escort. We met Jonah Ray and Matt Mira, who seem like cool dudes. We also met Jim Norton who is much friendlier than his standup and radio persona may lead you to believe. Recording started as soon as Chris showed up. We sort of fit in the studio. It seemed like they were having fun in a practiced, business sort of way. Matt laughed so hard he spit water on everyone when Jim made a joke about chess. You had to be there. Afterward, we talked to Chris who had been briefed on our status as Comedy Hack Day winners and so showed the appropriate level of respect and veneration.

After the podcast, we went out the Nerdist office in Burbank with George, who is one of the top three Uber drivers in all of LA, a fact we are supposed to relay to Uber CEO Travis Kalanick the next time we see him in San Francisco (we rated George five out of five stars). The Nerdist office is basically a warehouse. We met up with Jessica who, in the Monica extended metaphor, is kind of like the Pope. Jessica introduced us to Gerry Duggan who was awesome, and gave us a copy of the graphic novel he wrote. The Star Wars cantina set is great and I want it in my house. They also gave us sweet gift bags, the highlight of which was more of a highlight(saber) …I don’t know how to make this work. We later discovered that carrying a lightsaber down Hollywood Boulevard is apparently code for: “Hey crazy person and/or street vendor, want to have a conversation?”

After the festivities, we went to Griffith Observatory to get a better view of the smog, then off to LAX.

So there you have it, proof that we are as good at awarding Comedy Hack Day prizes as we are at throwing Comedy Hack Days—foreign government influence aside. We at Cultivated Wit also like to take one last opportunity to publicly thank Chris Hardwick, Christopher Fealy, Monica Moon, and the rest of the Nerdist team for their gracious participation in this prize.

Now the only question remaining to be answered is: what the fuck is up with this Uber trip, Conor and Ansh?