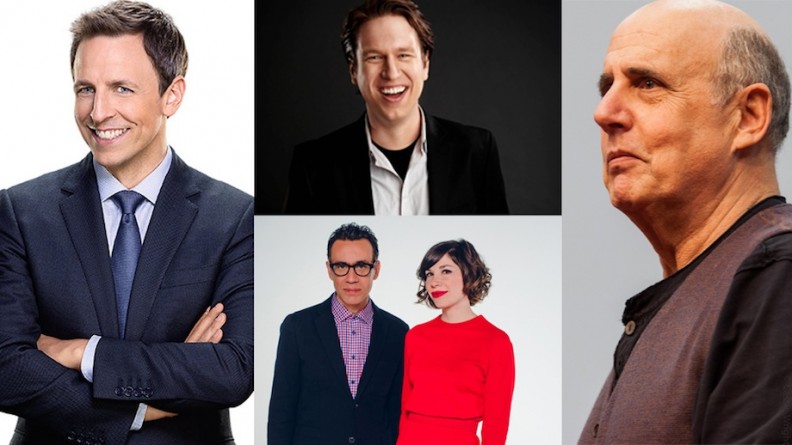 So let’s see. There is Whiskey Friday. There is my panel (How Creative People Arrive At Good Ideas) featuring Scott Aukerman at 11:00 am Sunday. Then there is Baratunde’s panel (Communicating With Humor: Perils & Best Practices) featuring Baratunde at 12:30 pm Sunday. What are you doing with the rest of your non-drinking hours?

Don’t worry, we are here to help. Here are some of the best comedy goings-on at SXSW Interactive this year, as compiled by our wonderful – not to mention well-versed comedy nerd – intern Sarah Naftalis.

Up Next featuring Fred Armisen

Sunday, March 9, 10:00-11:30 p.m.
The roster for this showcase is stacked. Fred Armisen! Sasheer Zamata! Chris Gethard! Kyle Mooney! Tim Robinson! How many names can I  list off with exclamation points after them before you quit reading and go get a good place in line!?!

Funny or Die Presents Bill Cosby in Concert
Monday, March 10, 8:00-8:30 p.m.
I’m not sure if you read that or just skimmed over it, but I just typed the words “Bill Cosby in Concert.” A chance to see one of the comedy and gelatin-snack world’s all-time greatest, live and in-person. I cannot wait to hear how the 76-year-old builds rapport with a room full of people younger than his grandchildren.

Comedy Gives Back
Sunday March 9, 10:30 p.m.-12:00 a.m.
You will be on the receiving end of so much incredible comedy all week, use this as an opportunity to receive a little more while also giving something back. The lack of any listed performers for this show either means it will feature an all-star lineup of ghosts or somebody special could be in store. We’re guessing it’s the latter.

Pretty Good Friends
Monday, March 10, 9:30 p.m.-11:00 p.m.
Eugene Mirman (Bob’s Burgers) is another one of our favorites, and he’s brought with him a band of very, merry men including TJ Miller, Todd Barry and a ton more. It’s promising a mix of standup, short films, music, and a pig roast. What more do you want to hear?

improv4humans
Saturday, March 8, 6:00-7:30 p.m.
Matt Besser is joined by Jon Gabrus and Tim Meadows for this live podcast. Audience suggestions and Twitter questions prompt monologues that inspire fully improvised scenes before your very eyes (or ears, if you can’t get in and have to listen to the recording later).

You Made It Weird
Tuesday, March 11, 6:00-7:30 p.m.
Who doesn’t love Pete Holmes? You tell me and I’ll say, “Hey! Guy! What gives!?” Then I’ll put that dummy in a sleeper hold and drag his lousy ass to this show so he can see what a hilarious charmer Pete Holmes is.

Comedy Bang! Bang!
Sunday, March 9, 4:00-5:30 p.m.
Mr. Aukerman subbed into my panel in a pinch, so I owe him a debt of gratitude far larger than this tiny plug. The least you can do is join me in going to see his show. Well, the least you could do is nothing. But the second-least you could do is come watch one of the very best in the show-hosting game.

The Meltdown
Sunday, March 9, 8:30 p.m-9:30 p.m.
The Meltdown is one of our favorite podcasts, and if you’ve never seen Kumail Nanjiani live you have missed out, dear friend. You hear me? YOU HAVE MISSED OUT!

Running the Show: TV’s New Queen of Comedy
Sunday, March 9, 11:00 a.m.-12:00 p.m.
Mindy Kaling talks The Mindy Project, women in television, and the changing digital audience. Castmates Adam Pally and Ike Barinholtz will be there, too; Mo’Nique will not.

The Humor-Centered Design Process
Monday, March 10, 9:30 a.m.-1:30 p.m.
UX designer and friend of Cultivated Wit Chelsea Delaney has long-been studying the overlap between design and comedy. This session is much more hands-on, and requires that you sign up in advance. But if you are a designer who is also a fan of comedy—or a comedian who wants to learn more about design—this one is a total must. We’re fascinated as hell to see how it goes.

Inside Late Night with Seth Meyers
Saturday, March 8, 3:30-4:30 p.m.
Seth Meyers is joined by producer Mike Shoemaker, and the panel will be moderated by Olivia Munn. In the midst of this total sea change within the historic late night comedy landscape, it’s pretty incredible to have access to one of the major players. Also, we’ll all get to see if this guy is that likable and charming in person or if that’s all TV magic.

Fearless Funny: The Women Changing Digital Humor
Saturday, March 8, 5:00-6:00
We featured Issa Rae in our Funded series last year, and know firsthand how hilarious and smart she is. Add in some smart folks from xoJane, and this should be a pretty insightful conversation.

Portlandia: Behind The Scenes With The Creators
Tuesday, March 11, 3:30-4:30
The. Hits. Keep. Coming. Fred and Carrie will both be there to talk about how one of the best shows on television comes together. Fans of sketch, fans of television, or fans of sitting in folding chairs should unquestionably check this one out!

How To Win The Internet In Sixty Minutes With Funny Or Die
Tuesday, March 11, 11:15 a.m.-12:15 p.m.
We got the chance to meet most of the people on this panel last year, and I can personally vouch that they are funny, interesting, and not one of them is a Gorgon secretly tricking you into attending so she can turn you into stone.

There you have it. Now you don’t have any excuse for missing the great comedy in Austin this week, other than that old SXSW standard excuse of “I got too drunk on Friday and fell in the Colorado River and washed up six days later in La Grange covered in graffiti and BBQ sauce.” Have fun and see you there!