A blog about creativity, technology, & humor.
Snapchat Cinema At Sundance: You Literally Had To Be There
Baratunde Thurston 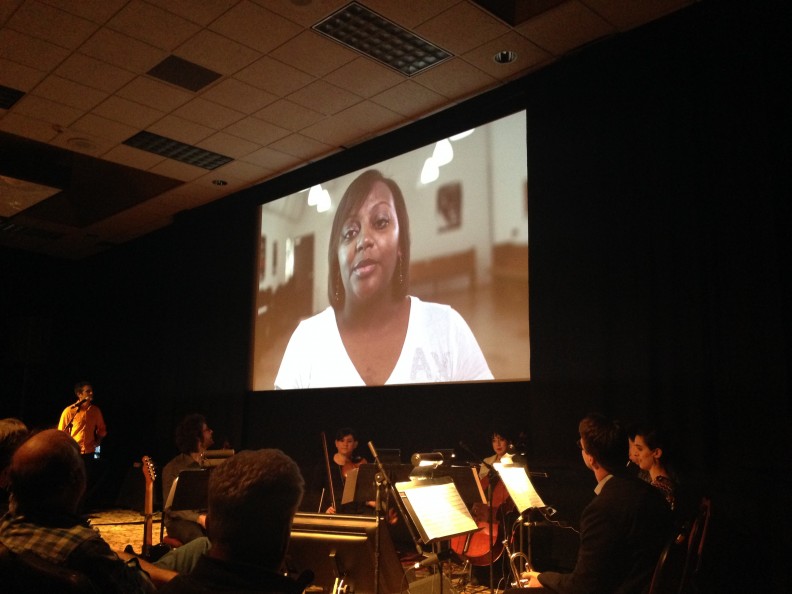 At the Sundance Film Festival this week, I expected to see technology play a large role in the form of sponsored events and panel headlines. I was not disappointed. YouTube hosted parties. HP constructed a massive tent at the center of Park City’s Main Street. I caught the tail end of a hashtag-titled panel focused on new interactive storytelling possibilities. #Vine! #VirtualReality! #Mobile!

Ironically, it was at that panel that a friend gave me a ticket to a show that didn’t fit the small-screen versus big-screen dichotomy. Its creator wasn’t looking for distribution via Netflix or theatres. In fact, he did not have any recording of his creation whatsoever. “You have to see it live,” he explained.

As I took my seat in the theatre Wednesday night, the first thing I saw on stage was a setup for a tiny orchestra. “Am I at a concert?” I thought. Then I noticed the large screen and felt better. “I’m about to see a film,” I reassured myself. Then the director stood before the screen and behind a microphone and started talking, and he never stopped. He did more than introduce his film. He narrated the entire thing. Live.

The Sundance official who introduced the show informed us that we were about to witness “the world premiere of a ‘live documentary’” created by director Sam Green. In 2003, Green released the Academy Award-nominated documentary The Weather Underground and more recently, Utopia In Four Movements.

His latest work is called The Measure Of All Things and tells stories from the Guinness Book Of World Records and the people who find themselves in its pages. “Live documentary” is the best term he could come up with to describe this unique experience.

On stage were three essential pieces: Sam, providing live voice-over narration; the screen, hosting still and moving images; the band, a six-piece ensemble known as YMusic, offering a live score like the orchestra pits of old.

Combining the ephemeral nature of improv with the intricate timing of a large choreographed dance number, the performance is a kind of high wire act. At its best, you forget that these pieces aren’t stitched together in perfect harmony using Final Cut. There is no final cut because the documentary is re-made at each performance.

As a member of the audience, knowing you’re seeing something that’s once-in-a-lifetime, that can’t be downloaded or streamed later, focuses your attention and connects you to others in the room. We were all at this weird and beautiful thing together, just us.

Using their Guinness records, Sam introduces us to the man who operates quietest room in the world, the person with the longest name in the world, and the oldest person in the world, among others. As he does so, a pattern emerges: these records are constantly being broken. There’s no such thing as a permanent record.

What if we told more stories by pursuing impermanence on purpose? What if we used our technology, not merely to fragment, distribute, and prolong, but to coordinate, focus, and curtail? What would we call it? Sam chose “live documentary.” I kind of like Snapchat cinema, but the label doesn’t matter.

Of course, Sam didn’t invent this. There’s a very successful live show called Pop-Up Magazine built on similar principles. Fast Company Live uses stage and a cast and images to tell a magazine story in front of an audience. And prior to any of that, our history forced this impermanence. After all, what are live theatre and music but the multi-party re-telling of a story at each performance, none exactly the same as another? Hi Shakespeare!

The difference today is we have the technology.

Our technology allows for perfect capture and perfect edits and perfect reproduction and perfect storage but also a perfectly lonely experience. So why choose impermanence? Because experiencing the choreography and serendipity of a live performance is special. Because sharing it with others in the moment, not via some micro-content marketing fusilade, builds community. Because knowing it won’t be available forevermore makes us value it even more.

In a particularly reflective moment, one of the subjects in Sam’s story tried to sum up everything, not just world records: “You’re born. You die. Everybody’s doing it. You’re on the list. Just know that and go.” The thing that happens between our birth and death is life, and living media, rather than just finding new ways to technologically consume it, is the real lesson here.