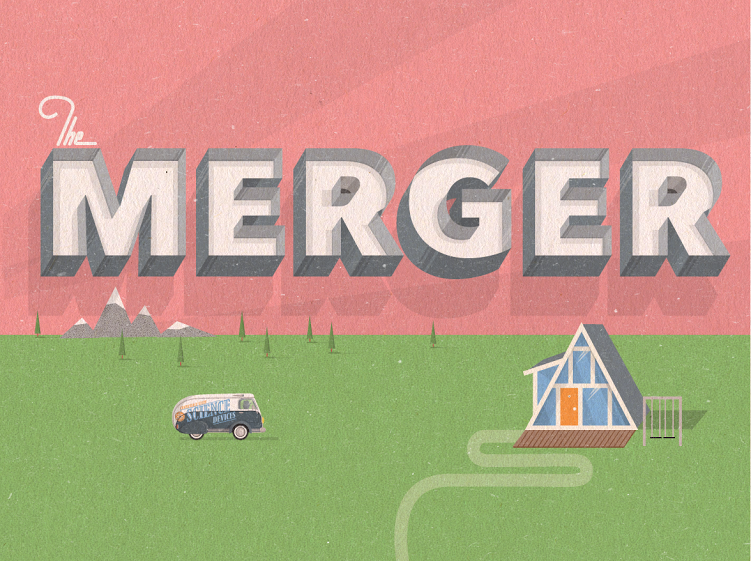 We’ve always been a company of overlapping skills and interests. “And” was part of our founding. Comedy and technology. Agency and content and events and products. New York and San Francisco. Burritos and bicycles. Today we announce another affirmative and: the merger of Cultivated Wit and I Shot Him. See our merger mania Tumblr for a more visual and fun announcement.

Quick aside: We recognize your time is valuable and literacy questionable, so I’ve recorded myself reading this out loud. Sound is great!

Some companies merge because of the irritating word “synergy.” Others do so at the behest of activist shareholders or bored investment bankers. Yet more merge because there’s actually no other form of conquest left to pursue. We’re doing it for all three of these reasons and more.

Our young and growing company has just grown a little more quickly with the addition of Mike Jeter and Adam Peterson as partners. This is where you clap.

Prior to our business marriage, Mike and Adam ran the award-winning San Francisco design studio I Shot Him. The name comes from a quote from one of the most renowned San Francisco madams from the Barbary Coast Times, Tessie Wall. After spotting her man Frank Deroux  leaving a show on Market Street with another lady, Tessie shot him out of a deeply painful love. Her statement to the coppers was: “I shot him because I loved him, damn him.” I Shot Him’s first studio was in Tessie’s former home.

Their work has explained Mexican drug cartel violence, assisted New Yorkers with disaster prep, and helped prevent the spread of HIV in SF. They founded The Black Harbor, an online home for creatives. They use their powers—branding, infographics, animation, interaction, and programming—for good. As they describe themselves:

We work hard to change hearts, minds and habits. We believe design has the power to do more than sell a product, but that it can make a difference through altering perceptions, emotions and actions for the good of us all. We also believe in having a good time while doing what we love, and we do love what we do.

Mike has his own blog post up about this merger, and you should definitely read it because it would be rude if you didn’t. The point is our firms share values. If you changed “design” to “comedy” you’d come very close to the founding principles behind Cultivated Wit, a name that was inspired by the Roman poet/soldier Horace.

“A cultivated wit, one that badgers less, can persuade all the more. Artful ridicule can address contentious issues more competently and vigorously than can severity alone.”

In fact, before all this fancy merger talk, we collaborated with Mike and Adam on this very website and on our pro-bono work for the American people in the fall of 2013 known as FuckYouCongress.com. Anything about these sites that looks good or works or appears to be a website was powered by Mike and Adam.

Today we’re all formally on the same team under the now-broader banner of Cultivated Wit. Mike and Adam are working out of our new San Francisco office with Brian Janosch and occasional Bay Area resident Craig Cannon. I will continue to anchor our NYC office, and we will all treat Craig like the company ping pong ball bouncing between coasts.

Together, we can count as clients The Ad Council, The City Of New York, The City Of San Francisco, Ford Foundation, MTV, BBC America, Funny Or Die, AOL, Squarespace, MailChimp, Google, and you. Sure, why not. You’re our client, too! Speaking of which, your payment is past due. Please get on that.

Our ability to tell smart, fun stories, host extraordinary events, and make products for creative people, has just stepped up a notch. The same goes for our content—web series, blogs, even emails. Nay, especially emails.

The first project we’re launching under the new Cultivated Wit perfectly captures our values, skills, and ethos. We’ve been selected to build the campaign for 100Kin10, a massive effort to recruit 100,000 science, technology, engineering, and math (STEM) teachers in the United States by 2021. Here’s the video we made to help raise funds for the effort.

Over the coming months, we’ll be working with 100Kin10 and more than 30 partner organizations to encourage college STEM majors to pursue a career in teaching. Let’s start right now: hey college youngsters, teach the science! There. Much better.

We will have more original content, client projects, events, and product announcements in the future. But for now, just know that if you stand for good and need help with your digital storytelling, we got you.

If you’re looking to sponsor or host the best live comedy show slash hackathon in the world, we got you.

If you want to bring in a speaker or workshop that kills you with laughter and insights about the future, we got you.

And if you want to join this team, stay tuned. We don’t have any formally open positions right this second (blame Obama), but we will in the future. In the meantime, email, Facebook, and Twitter are the best ways to stay in touch, oh and regularly visiting this website and clicking everything when you do.

We believe in bringing good ideas to life and working hard to help those ideas spread.

We believe in the combined super powers of comedy, design, and technology.

We believe the future will be defined by and.

Thank you for those that have supported either company prior to now, and thanks for your support for our merciless expansion in the future, which you have implicitly guaranteed by reading this far. Got questions or comments? You can tweet at @CultivatedWit using #MergerMania, spam our Facebook page, or flood our inboxes to your heart’s delight.

Can’t get enough of this merger? Neither can we, so we’re spending a few days getting hyped about Merger Mania. See some of the insane mergers we’re proposing and add your own using #MergerMania on Twitter or Tumblr.