A blog about creativity, technology, & humor.
Hazmat Suits And An East Harlem Bookstore: Behind The Making Of Our Web Series, Funded
Baratunde Thurston 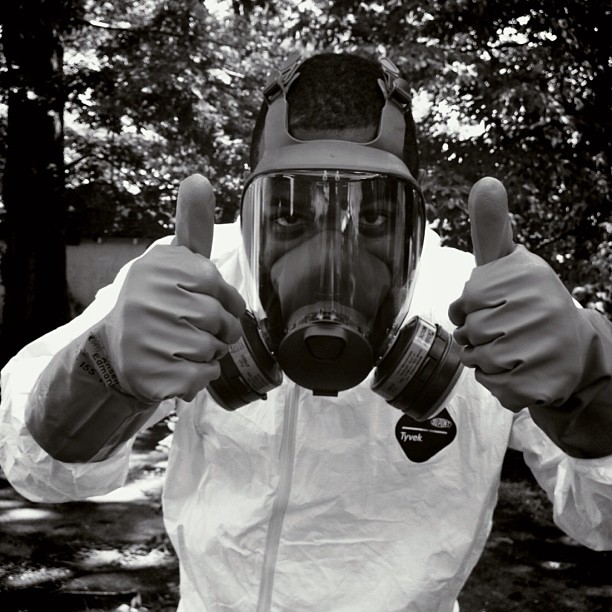 Two down, eight to go. That’s our progress bar for shooting the web series we’re making with AOL about successfully crowdfunded businesses.

Aurora was great, and it wasn’t hard to understand why people followed her and ponied up $40,000 to get the store started. Here’s an action photo of Brian “producing.”

Then this past weekend, we went out to Long Island to the site of Nikola Tesla’s last laboratory. With major thanks to web comic rockstar The Oatmeal, Tesla’s lab and the land on which it rests have been saved from yet-another-Long-Island-strip mall. We met and joined with teams of volunteers cleaning, digging, and building to honor someone temporarily overlooked by history. Oh, were you expecting an explanation of the lead image in this post? Why am I dressed in full hazmat suit and respirator mask? Have I been using Breaking Bad as a small business tutorial? Not quite. You see Tesla’s lab became home to some photo processing plants for a few decades and that means is it’s a bit dangerous, so I had to put on the meth suit to avoid asbestos and possible laser-beam-shooting robot flies.

We’ll be on the road a lot these next few weeks, knocking out more episodes. Follow us on Twitter for almost real-time highlights.