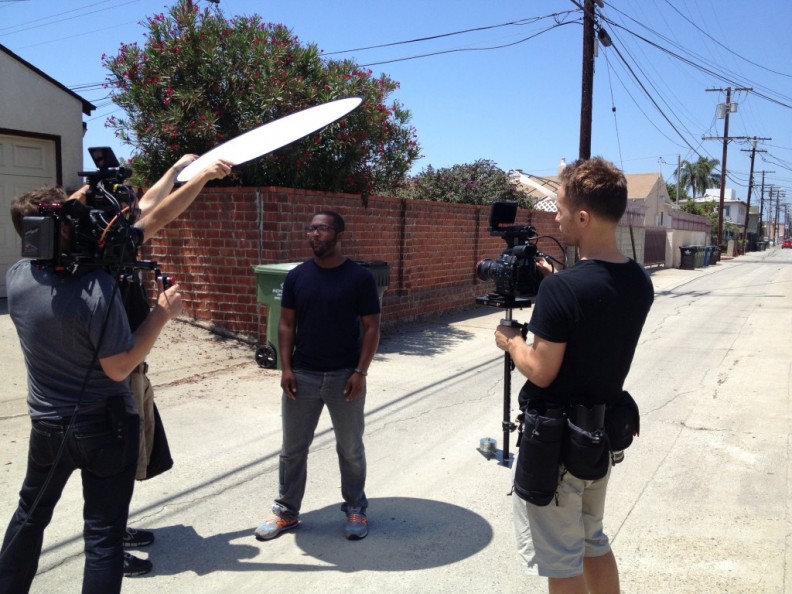 New York is a literary city and also a place that you’re worried may kill you at any moment’s notice, so it’s little surprise that our first two episodes of Funded that we shot there carried similar themes. Fittingly, our trip to L.A. this past week featured cameras filming cameras filming cameras and a beautifully curved specimen worth millions of dollars.

More specifically, we spent Tuesday and Wednesday meeting Issa Rae, creator and star of the Youtube series Awkward Black Girl, and Julie Uhrman, the CEO and energetic force behind Ouya. Here’s a little peek behind the scenes of each episode.

Awkward Black Girl
We spent all day Tuesday meeting the charming and inspiring Issa Rae, who raised $56 thousand dollars in 2011 to extend the life of her super popular web series Awkward Black Girl. In spite of her success, the spirit of making due with what you’ve got was palpable from the egg-carton-lined studio where we met Issa behind a walk-in medical clinic/dentist’s office.

My favorite quote of the day may have been Issa explaining how she quit her job at March Of Dimes to work on her show full time: “I stopped helping babies to make Youtube videos.” But in all seriousness, it was inspiring to spend hours picking the brain of somebody with the artistic tenacity of Issa. Her vision and devotion are clearly what carried her show from scrappy to popular to sustainable, and now that she’s found some success I think Issa’s character is even more on display as she now spends more of her time helping other actors and producers bring their dreams into reality.

It was definitely the type of shoot that made me nervous not because we didn’t get enough good stuff, but because we got too much of it. We’re going to need life jackets for the ocean of good material we’re about to fall into in editing. Ouya
Going into our shoot at Ouya‘s Santa Monica’s office, we knew our time would be tight. We had a little more than an hour to spend with their CEO Julie Uhrman, so we prepared ourselves as much as possible and hoped for the best.

As it turns out, hoping wasn’t necessary in the slightest because when you get somebody on camera that’s as on-their-shit as Julie is then an hour of interview is like a day with most mortals. Ripe with energy and enthusiasm about her work, I feel like a theme is beginning to develop across all these success stories: passion is contagious. In every one of these cases, the people we talk to really, truly, deeply cared about their project, and the nature of crowdfunding enabled them to turn that into money. In Julie’s case, $8 million dollars worth.

Now, as to whether that deeply rooted passion for Ouya allowed Julie to beat Baratunde in an epic battle of TowerFall, you’ll have to catch the episode this fall to find out.